What is Radiated Emissions Testing?

What is EMC Radiated Emissions Testing? What are the EMC test standards and equipment required for conducting radiated emissions tests?

Radiated emissions testing is the measurement of the electromagnetic emissions that are intentionally and unintentionally generated by the equipment under test (EUT). This test is one of the EMC family's most common and essential tests. Not all but most electronic devices emit electromagnetic radiations unintentionally. These radiations often create hindrance in the operations of other devices in its vicinity. Hence, many international regulatory organizations have set limits for these radiated emissions in their regions. All electronics and electrical products need to comply with the standards. 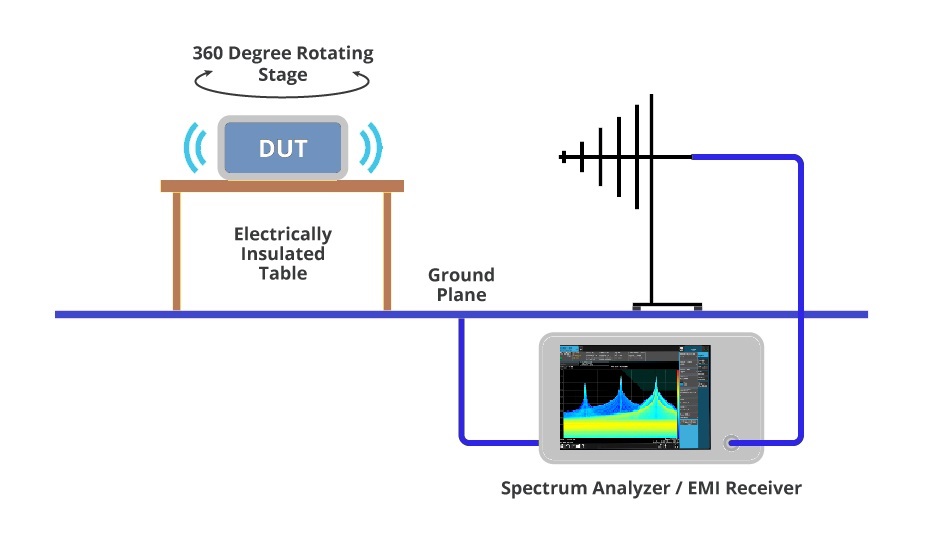 What are the EMC Standards for Radiated Emissions Testing?

The following are some EMC standards that specify limits on radiated emissions:

What are the Test Equipment and Test Site Required for Radiated Emissions?

The radio emissions produced by the devices are not spherical and symmetric. Rather, they are pretty directed in one direction. Hence, the test lab has to vary the height of the receiving antenna between 1 and 4 meters as well as adjust the rotation of a turntable on which the EUT will be placed. Following are other the test equipment required for radiated emissions testing:

For testing radiated emissions from electrical devices, there are two main types of test sites: Open Area Test Site (OATS) and Semi-Anechoic Chamber (SAC). A fully compliant test site includes a ground plane that stretches between the EUT’s position and the measuring antenna and beyond them, a means of rotating the EUT, and a mast that allows the antenna to be scanned in height from 1 to 4 m as well as giving both horizontal and vertical polarization. The commercial standards allow three measurement distances, 3 m, 10 m, and 30 m.