Absorbing Clamps or ferrite tubes are the EMC testing components which are used to measure the interference signals from power lines. Absorbing Clamps from the leading manufacturers are listed below. Use the parametric search tools to narrow down on products by frequency, cable diameter and various other parameters. View product details, download datasheets and get quotes on Absorbing Clamp that you need.

What is an absorbing clamp in an EMC Test Setup? 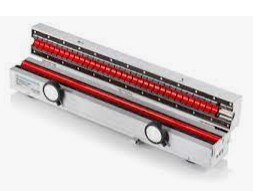 An absorbing clamp is an EMC measuring instrument that is used to measure the radiated disturbance (emission) from a small EUT at a frequency range above 30 MHz (typically, 30 MHz to 1000 MHz/ 1GHz) by measuring interference power on power supply cables. Small EUTs mainly emit disturbance via closed cables (e.g., power cables). The absorbing clamp method is an alternative method to the standard method that uses an antenna system to measure the radiated emission from the EUT. The standard method (antenna system) to measure the radiated power is preferred when the equipment has several connected cables or when its dimensions are greater than a quarter wavelength (i.e., it is physically large, and/or the frequency of interest is high).

The absorbing clamp can also be used to measure the screening attenuation of RF coaxial cables.

The standards such as CISPR 13 [EN 55013], CISPR 32 [EN 55032], and CISPR 14 [EN 55014], and some more standards prefer absorbing clamp for disturbance power measurements. In addition, the absorbing clamp can be used as a coupling unit for the immunity test also.

Construction and working of the absorbing clamp: 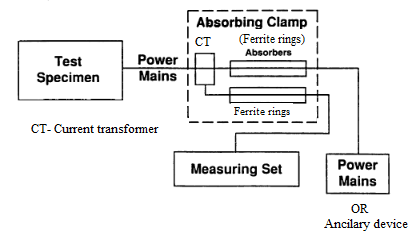 An absorbing clamp consists of a ferrite current transformer that operates at a frequency range above 30 MHz and two sets of ferrite rings.

Both of these ferrites are split into two halves. One half mounted in the absorbing clamp base, and the other half mounted in the hinged top cover. The mainline/power cable to the EUT is can easily be laid into the bottom halves of the ferrites by opening the clamp. When the clamp is in closed stage, the two halves meet, forming a ring around the line(s) under test.

How to measure the interference power?

Now the disturbance power (Pico watts) is calculated by using the following formula. Here, the insertion loss value is provided in the manufacturer's data sheet.

Clamp factor/correction factor: It helps to include the insertion loss of the absorbing clamp (dB) in the disturbance power calculation.

Insertion loss: Represents the power loss due to the insertion of the clamp or power loss in the clamp. It is represented in dB.

Maximum cable diameter: Represents the maximum diameter of the cable that can be tested with the absorbing clamp. It is represented in cm.

Aperture Diameter:  Represents the aperture diameter of the clamp. It is represented in cm.

Maximum input power (for immunity test): Represents the maximum limit of input power that accepts by the absorbing clamp. It is represented in Watts.

EMC Directory has listed absorbing clams used in EMC Testing from the leading manufacturers. View product details, download datasheets and get quotes on products that meet your requirements.