An EFT/Burst generator is used to simulate/generate series of fast rise time and duration (5µs/50µs) pulses at set frequencies to test the immunity of equipment against EFT/Burst. EFT / Burst Generators are used to test how electrical and electronic equipment operates under interference. EFT / Burst Generators from the leading manufacturers are listed below. Use the parametric search tools to narrow down on products by waveform, Burst Duration and various other parameters. View product details, download datasheets and get quotes on EFT / Burst Generator that you need.

What are EFT or Burst Signals?

Electrical Fast Transient (EFT) or Burst is a sequence of a limited number of distinct pulses or small electrical surges occurring within a product itself as well as from the data or power lines in a facility. The EFT/burst occurs due to the events such as relay contact bounce, interruption of inductive loads, fluorescent lights, when AC/DC connection is made or broken, equipment powered down, or circuit breakers switched, and so on.

The burst is characterized by its pulse time/duration (tp), rise time (tr), and pulse repetition frequency. Since the duration of each transient is short, the bursts have fairly low energy. However, these transients can affect the equipment performance or can cause equipment failure. Hence, it is necessary to test the immunity of the electrical/electronic products against the EFT.

The IEC 61000-4-4 standard is the international EMC standard for conducting an electrical fast transient/burst immunity test on equipment to check its ability against these transients. This standard defines an idealized burst with a relatively long duration (15 ms) repeated at a rate of a few kHz. The pulse amplitude of the transients during the burst is typically 0.5–4 kV peak; the pulse rise time is typically 5 ns, and the pulse width is 50 ns. 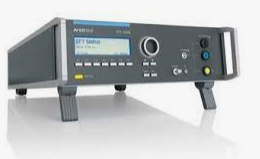 What is an EFT Generator?

An EFT/Burst generator is used to simulate/generate the EFT (burst) interference signals as per EMC standards such as IEC 61000 4-4 to test the immunity of equipment against EFT/Burst (Figure 3).

Usually, the EFT immunity test is done with the help of CDNs (Coupling decoupling networks) or a capacitive clamp. The CDNs couple an EFT generator to the equipment under test (EUT) and prevent dangerous voltages from being sent back into the ac power system.

How is an EFT signal Generated?

A simplified circuit diagram of the EFT generator is shown below. Initially, the charging capacitor Cc is charged to a certain value through the charging resistor Rc by a source U.

When the high voltage electronic switch is closed, there will be an EFT/burst signal observed on the test equipment or load.

Figure 3: A simplified circuit diagram of the EFT generator

Key Specifications of an EFT generator:

Pulse amplitude (Open circuit): Represents the peak amplitude of the EFT/Burst in kV that can be provided by the EFT generator.

Voltage into 50 Ω: Represents the amplitude of the EFT/Burst in kV when the load is 50 ohms.

Waveform into 50 Ω: Represents the EFT characteristics in terms of rise time and pulse duration/width. It is represented as 5 ± 1.5 ns / 50 ± 15 ns. Rise time is the time taken by the impulse to reach 90 % of the final value from 10% of the initial value and pulse duration represents the time to reach 50% peak amplitude from maximum peak amplitude.

Voltage into 1 kΩ: Represents the amplitude of the EFT/Burst in kV when the load is 1 kilo ohm.

Burst frequency: Represents the number of bursts per second that can be provided by the EFT generator. Usually, it is in the range of Hz to kHz.

Burst duration: Represents the time duration of a single burst. Usually, it is represented in ms.

Burst period: Represents the time duration between two bursts that are nearby to each other. Usually, it is represented in ms.

Polarity: Represents the Polarity of the EFT voltage from the EFT generator. The EFT generator has the capability to generate burst voltage in Positive/negative/alternating polarity.

Fuse Type: Represents the current rating of the fuse in Amps.

EMC Directory has listed EFT / Burst Generators from the leading manufacturers. Use the parametric search tools to narrow down on products based on your requirement. Once you find parts that meet your requirement, view product details, download the datasheet, compare products and request quotations. Inquiries sent via EMC Directory are directed to the manufacturers who get back to you with a quote or information.