What is a Coupling Decoupling Network or CDN?

A CDN (Coupling Decoupling Network) is a device used in conducted immunity EMC tests that are performed as per IEC/EN 61000-4-6.  The main function of the CDN is as follows.

1. Couples the RF disturbance signal from the RF signal generator into the cable connected to the EUT.

3. Provides standardized common-mode impedance (150 ohms) for the EUT power lines, which is independent of the external power line impedance.

The CDNs can be used to inject the common-mode signal as well as the differential mode signal to the EUT port. 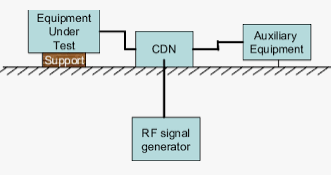 The CDN device uses passive components like a resistor & coupling capacitor for injecting the RF disturbance into a cable and uses the decoupling inductor to decouple the RF inference signal between the RF input port and auxiliary equipment (AE) port. The basic CDN concept and its function are shown below.

The RF signal path shows that the coupling capacitor & resistor provide a path for injecting the RF inference because it provides a low impedance path at RF frequencies. On the other side, the decoupling inductor provides a high impedance path at RF frequencies; hence the inductor blocks the RF signal from entering the other associated auxiliary equipment.

Number of lines: Represents the number of lines that can be RF injected by the CDN. It can inject the RF disturbance signal into the single line/ two lines/four lines/five lines…etc.

Common mode impedance: Represents the common-mode impedance of the EUT port of the CDN. Usually, it has a value of 150 ohms.

Decoupling isolation: Represents the signal isolation between the RF input port and the auxiliary port. It is represented in dB.

Insertion loss: It is the loss due to the insertion of CDN in the measurement circuit (RF in –EUT). It is expressed in decibels (dB).

Input power: Represents the input power requirement of CDN. It is represented in Watts (W).

Connectors: Represents the connector type associated with the RF input port of the CDN.

Connector EUT: Represents the connector type associated with the CDN for the EUT equipment connection.

Weight: Represents the weight of the CDN in Kg.