EMC Pre-Amplifiers from the leading manufacturers are listed on below. Narrow down on the products based on your requirement. View product details, download datasheets and get quotes on EMC Pre-Amplifier that you need.

What is an EMC Pre-Amplifier? 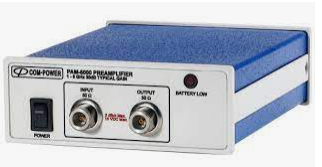 An EMC Pre-amplifier is an electronic amplifier that converts a weak signal into a strong noise-tolerant output signal, which is strong enough to be sent to an EMI receiver. It is a voltage amplifier that amplifies the voltage of the input signal. This amplifier helps to detect and measure the signal that is hidden below the noise floor of the EMI receiver. If this amplifier is not used, then the signal which is hidden below the noise floor of the receiver will not be detected. Hence, it is necessary to use the EMC pre-amplifier between the measuring equipment (for example, Near-field probes) and the EMI receiver to improve the sensitivity of the measuring process.

The EMC pre-amplifier is primarily used for EMC radiated emission testing as per EMC standards, such as FCC, CISPR, EN, FAA, and MIL-STD.

The key parameters to evaluate when selecting an EMC Pre-Amplifier are listed below.

Frequency: Represents the useable frequency of the EMC pre-amplifier.

Max Output Power: Represents the maximum RF power output from the pre-amplifier. It is represented in dBm.

Gain: Represents the gain of the pre-amplifier in dB.

Noise Figure: It is the measure of degradation of the signal-to-noise ratio (SNR) (caused by components in a signal chain). It is a number. A pre-amplifier with lower values of noise figure indicates better performance.

Output Impedance: Represents the output terminal impedance of the pre-amplifier. The output impedance is usually 50 ohms.

Input Impedance: Represents the input terminal impedance of the pre-amplifier. The input impedance is usually 50 ohms.

Max Input Power: Represents the maximum RF power input that can be handled by the pre-amplifier. It is represented in dBm.

Input VSWR (typical): Represents the measure of how efficiently radio-frequency power is transmitted from the measuring equipment into the input terminal of the pre-amplifier. A low input VSWR is the indication of a good preamplifier.

Output VSWR (typical): Represents the measure of how efficiently radio-frequency power is transmitted from the output terminal of the pre-amplifier into the EMI receiver/spectrum analyzer. A low input VSWR is the indication of a good preamplifier.

Intercept point IP3 (output): IP3 is the point where 3rd order products would overtake fundamentals in output power. It is represented in dBm.

EMC Directory has listed EMC Pre-Amplifiers from the leading manufacturers. Use the parametric search tools to narrow down on products based on your requirement. Once you find parts that meet your requirement, view product details, download the datasheet, compare products and request quotations. Inquiries sent via EMC Directory are directed to the manufacturers who get back to you with a quote or information.