An EMI Receiver is a test device similar to a Spectrum Analyzer that is used to observe the RF signals with respect to frequency. In EMC emission tests, the radiated electromagnetic energy is measured by using a spectrum analyzer or an EMI receiver with a suitable current probe (for conducted emission) or a suitable measuring antenna (for radiated emission). EMI Receivers from the leading manufacturers are listed on below. Narrow down on the products based on your requirement. View product details, download datasheets and get quotes on EMI Receiver that you need.

What is an EMI Receiver?

An EMI Receiver is a test device similar to a Spectrum Analyzer that is used to observe the RF signals with respect to frequency. In EMC emission tests, the radiated electromagnetic energy is measured by using a spectrum analyzer or an EMI receiver with a suitable current probe (for conducted emission) or a suitable measuring antenna (for radiated emission).

Most EMC conducted and radiated emission tests belong to CISPR standards, which require Quasi Peak (QPK) and Average (Avg) values. EMC Testing for the MIL (Military) standard, also requires peak noise measurement. A spectrum analyzer does not have a Quasi Peak (QPK) detector. Hence, a spectrum analyzer is only suitable for basic pre-compliance testing; it cannot be used for conducting the full range of EMC tests for certification. This is why we use an EMI receiver.

An EMI Receiver is used along with transducers (for example, antenna, E/ H field probe, etc.) and correct cables to measure the radiated and conducted emissions emanating from electronic devices. It is also used to check the electric field uniformity during the EMC immunity tests, diagnose and repair EMI problems that arise very often during the early stages of the product development cycle. 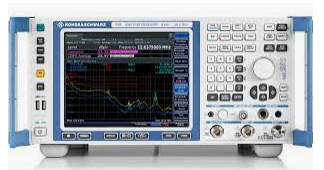 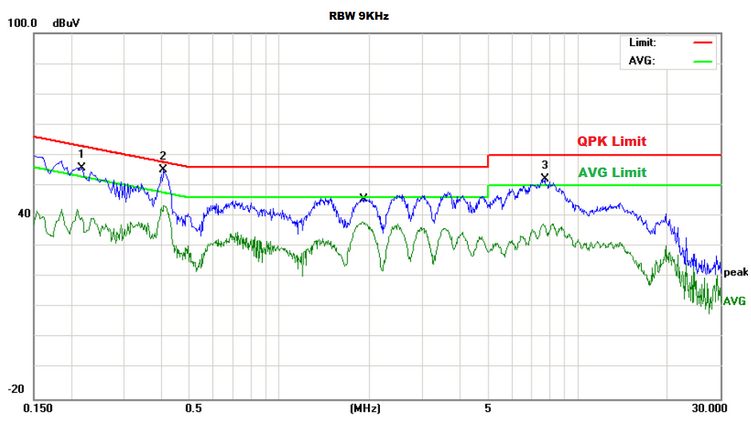 An EMI Receiver is like an oscilloscope. However, oscilloscopes look at signals in the time domain, but the EMI receiver looks at signals in the frequency domain. Hence, the EMI receiver will display the amplitude of an RF signal on the Y-axis (usually in dbµV) and the frequency of the RF signal on the X-axis. The x-axis of the EMI receiver is linearly calibrated in frequency with the higher frequency being at the right-hand side of the display. The Y-axis of the receiver is calibrated in amplitude (either linear or logarithmic scale, for most applications, a logarithmic scale is preferred for most measurements). The EMI receivers indicate the measurement reading by using the peak detector, Quasi peak detector (QPK), average detector, and RMS detector.

Nowadays the EMI receivers come with FFT (Fast Fourier transform) technique, which offers various advantages such as reduced time for measurement when compared to traditional EMI receivers and features.

How does an EMI receiver work?

A simple block diagram of the EMI receiver is shown in figure 4. Basically, an EMI receiver is a Super Heterodyne receiver that utilizes a frequency mixing (heterodyne) method to convert a received RF signal at a certain frequency to a fixed intermediate frequency (IF), which can be processed more conveniently than the original carrier frequency. Let's discuss the working of an EMI receiver.

The input signal from conducted emission test (via current probe) or radiated emission test (via antenna) is received by the RF preselection bandpass filter (BPF1) and amplified by the low noise amplifier (LNA). The preselection filter section prevents the unwanted signal from entering the receiver, thereby ensuring the selectivity of the receiver.

The output of the low noise amplifier (LNA) (i.e., SIN) is fed into the mixer M, where the signal from the local oscillator LO with frequency f(LO) is superimposed. By tuning the frequency of the local oscillator, the user can measure the signal at the desired frequency of interest to be measured. The output of the mixer (SIF) is in the intermediate frequency (IF), which can be more conveniently processed than the original carrier frequency. The mixer output (SIF) is fed to a bandpass filter which determines the bandwidth and the linear signal transfer characteristics of the EMI receiver.

Peak detector: A peak detector is an electronic circuit consisting of a diode, resistor, and capacitor to determine the peak of the input signal. A peak indication is achieved with an extremely short time constant for charging and a very long time constant for discharging. 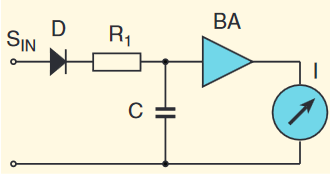 Average detector: Provides the average amplitude of each signal component across its period.

RMS detector: Forms the effective value of the demodulated IF signals.

Key Specifications of an EMI Receiver:

Detectors: Represents the types of detectors used by the EMI receiver. For example, Peak, Quasi-peak, Average, RMS, and CISPR-Average detectors.

IF Bandwidth: Represents the IF bandwidth of the EMI receiver. Usually, it is in the kHz range.

VSWR: Represents the measure of how efficiently the electrical signal (voltage) is transmitted from the current probe or receiving antenna into the input terminal of the EMI receiver. A low input VSWR is the indication of a good EMI receiver.

Measurement Time (manual mode): Represents the time taken to measure in manual mode. Usually, it is in the range of ms to s.

Maximum CW RF Power: Represents the maximum CW RF power that can be measured by the EMI receiver.

Sampling rate: Represents the number of samples per second. Usually, the EMI receiver sampling rate is in the range of MHz.

Dimensions: Represents the dimension of the EMI receiver in L × W × H mm.

Weight: Represents the weight of the EMI receiver in Kg.

EMC Directory has listed EMI Receivers from the leading manufacturers. Use the parametric search tools to narrow down on products based on your requirement. Once you find parts that meet your requirement, view product details, download the datasheet, compare products and request quotations. Inquiries sent via EMC Directory are directed to the manufacturers who get back to you with a quote or information.